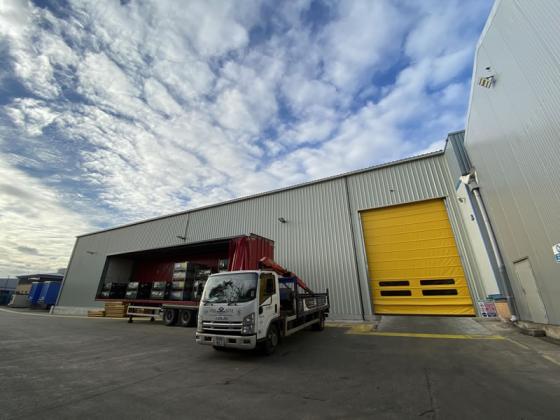 With almost 2500 employees across 8 manufacturing sites and a £265m annual turnover, Sertec is a rapidly growing, ambitious company - one of the largest independent stamping and assembly suppliers in Europe with an extensive steel and aluminium product range.

At its Tyseley premises in Birmingham, Smart-Space worked with the Sertec team, headed by Andy Cresswell, Group Facilities Manager, to create a long-term space solution to house the company’s finished goods.

Continue with  investment and growth plans

The company needed additional space to be able to continue with its investment and growth plans. It was particularly time-sensitive as unavoidable delays had already been created by the Covid-19 pandemic.

“I chose Smart-Space because they gave me that essential ‘warm feeling’ combined with the more pragmatic values of functionality, commercial sense and time schedules” explained Andy.
“Jason, Smart-Space’s Sales Director, is professional and business-like but also extremely affable and informal. I did put the team under great pressure and challenged them very hard about the scope, delivery and timing of the project. I needn’t have worried as everything was managed exactly as promised.”

The Smart-Space team worked in complete harmony with Sertec. The building design changed, the weather was extreme, changeable and challenging, there was no room for error, time was against them but still the two companies worked well to achieve exactly what was required on time.

Sertec needed to introduce some of the building’s services during the build so time and work was managed strategically to allow for this. The Smart-Space team changed plans accordingly without losing any build time.

The Smart-Space team was praised for many things but primarily its ‘can-do’ attitude, going above and beyond expectations, even unloading a wagon that wasn’t theirs to help avoid delays.

Andy Cresswell on health and safety 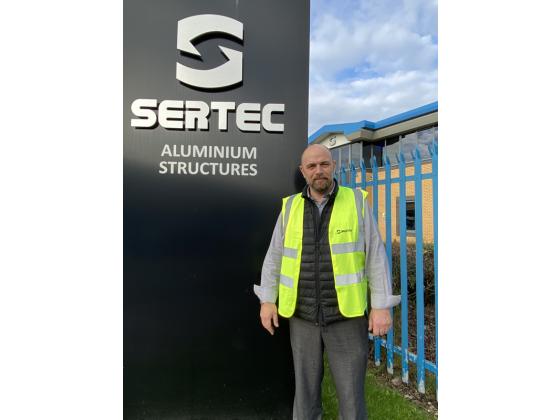 “One of the biggest factors for me was that, as principle contractors, health and safety was owned entirely by Ryan Gibson at Smart-Space. This vital aspect of the build, which of course is of paramount importance, was managed extremely well and allowed me more time to focus on the overall project. And there wasn’t a single incident.”

The building is almost identical to a permanent, traditional structure with just the concrete base and wind braces to differentiate it. Its grey facade is broken up by a bright yellow 7m fast action door that works with the height of the unit. It can be set at lower heights to prevent the building getting too cold. The lights work on sensors for energy efficiency and there is a general air of order and method inside and outside of the building - largely down to Andy Cresswell’s approach.

Completed within 15 weeks, from idea to completion, the Sertec Maxi-Space facility is now fully operational, stocked with finished goods with an invaluable access doorway into the main business premises that it adjoins.

It has been integrated into the existing Sertec premises seamlessly.

The legacy of this build means that Sertec’s capacity to expand, install new assembly lines and introduce new products can go ahead according to plan. 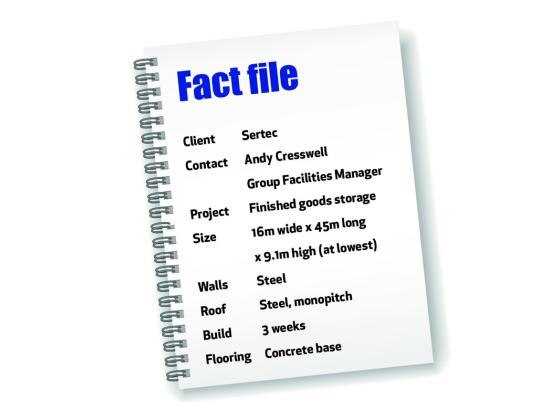 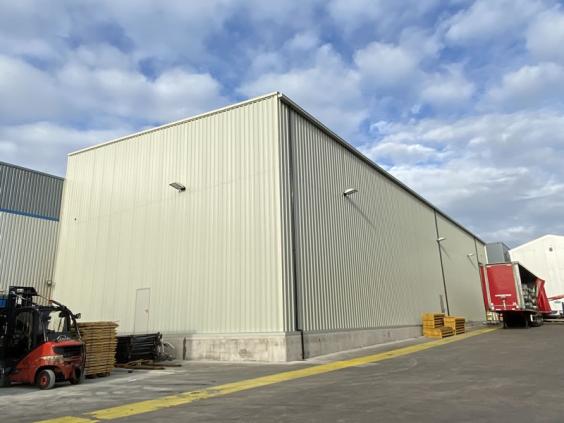 I chose Smart-Space because they gave me that essential ‘warm feeling’ combined with the more pragmatic values of functionality, commercial sense and time schedules.

I trusted Smart-Space with all of the project’s health and safety.