Workshop building for CoTech in Bedford 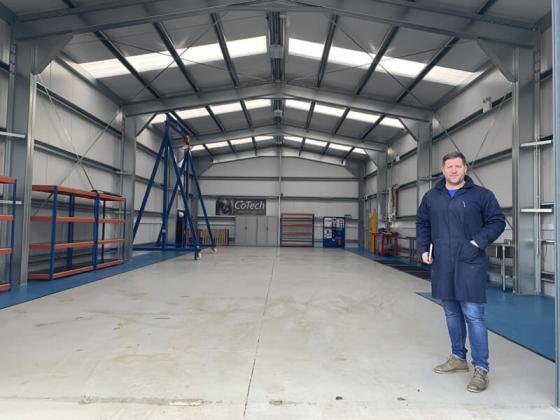 Workshop building for CoTech in Bedford

CoTech Trading in Bedford is a fascinating family business that supplies rare and legacy military aircraft parts across the world. It hits the big numbers - for the past 30 years it has worked with over 800 customers in 120 countries, co-ordinating 1200 suppliers.

Much of the company’s business is with international airforces in India, Indonesia, Malaysia, Singapore and the Middle East who favour western Jaguar and Hawk fleets. CoTech holds an expansive portfolio of stocks and its vast supplies range from small bolts to large-scale pieces of equipment.

This is where the new building comes into play. Lee McCrum, Head of Operations, is in the process of setting up CoTech MRO (maintenance, repair and overhaul) as a standalone business. CoTech Trading is proud and rightly protective of its hard-won AS9120 accreditation. Consequently there will be a clear distinction between CoTech Trading and CoTech MRO through separate buildings where CoTech MRO can work towards the more appropriate AS9110 accreditation.

As this is a long-term proposition and the land is owned by the Bhatti family - CoTech’s directors - it made sense to opt for a permanent building. Lee said that it is expected that the whole building project would pay for itself after six months of CoTech MRO being operational.

After 24 high-ranking years in the British Army, Lee is a stickler for detail and appreciated the communications, drawings and work schedules provided. There were times when Smart-Space could have been more informative but the work progressed well and was finished to an excellent quality. There was a small leak after the build had been completed which was fixed by Smart-Space immediately.

The Smart-Space building sits neatly next to the main CoTech warehouse. The horizontal unistruts (shown in gallery below) connect the water and power supply from CoTech’s main building to the instant building. To further support CoTech MRO operating as a separate entity, it has its own billing system for these services.

The team at CoTech took on the finish of the building in terms of organising utilities, completing flooring and planning the fittings. The building is clearly zoned into different areas - cleaning, inspection, goods in/out, tools and PPE, IT, technical reference archive and a gantry to lift and work with heavy pieces. It is a well considered use of its 220 square metres. True to Lee’s military background and the company’s business sector, it is immaculate!

Despite the February weather, the building was remarkably warm - attributable largely to the substantial steel roof. When required, there are instant wall heaters operated by a sensor, reacting to body presence - an efficient way to add extra heat where people might be working.

The space has the benefit of an extensive lighting system but the roof design means it is flooded with natural light so the electric lights are rarely used.

For now... CoTech MRO will be concentrating on becoming accredited and established. For the future, it will seek to expand, diversify and offer more services - so a further instant building is a distinct possibility. 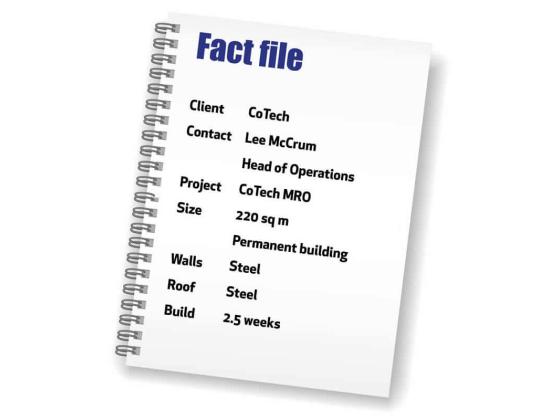 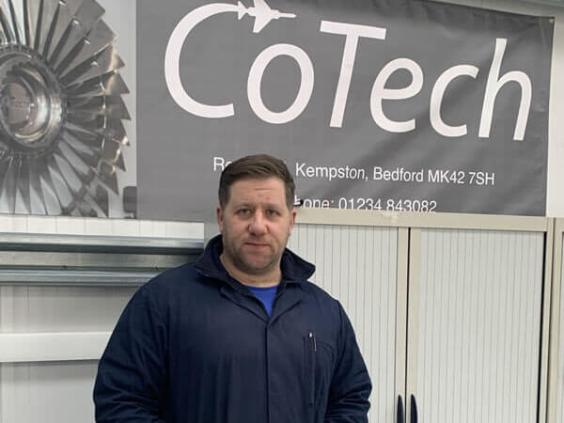 "Working with Smart-Space ticked all the boxes and felt right"

“We chose to work with Smart-Space for a number of reasons”, explained Lee. “

Jason Lynock and Andy Freeman came to see us. They walked the ground, made suggestions, gave us options and talked a lot of sense.”

Lee had dismissed those who quoted without visiting and selected Smart-Space as they provided a full service, including planning permission, groundworks, drawings and build. It wasn’t the cheapest option but it felt right and the Smart-Space team had instilled a feeling of confidence through its professional approach.

"Working with Smart-Space ticked all the boxes and felt right"